Why I don’t believe in miracles (and that’s OK) 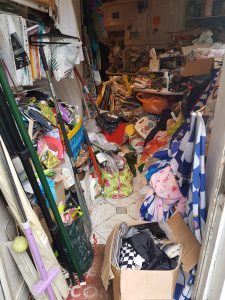 A client’s kitchen on my first visit

The NHS (National Health Service) defines Hoarding disorder as “when someone acquires an excessive number of items and stores them in a chaotic manner”.

It goes on to say “It’s considered to be a significant problem if:

I liberate busy women from the shackles of clutter, disorganisation and chaos.

And my clients include people who hoard.

Here are five things I want to say about hoarding.

1. There’s more than one type

Some people I work with, who have hoarding tendencies, live (just) among unstable heaps of random objects, with little rhyme or reason to how their stuff is stored.

With the boxes filling rooms so they can’t access them.

So I don’t fully agree with the NHS definition above.

Some clients struggle to manage in dirty houses.

It’s difficult to clean when you’ve got clutter – so the dust builds up. 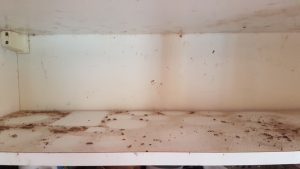 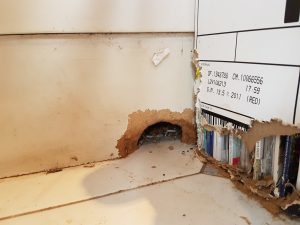 When we cleared this area, we found a mousehole

Others keep their place meticulously clean.

I’m not entirely sure how they manage it to be honest. 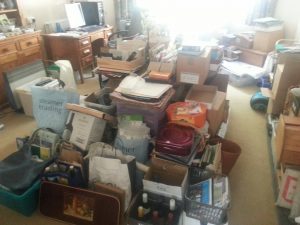 There’s a dining table under there!

Some people keep everything.

Even their own excrement.

Others have no trouble letting go of the categories above…

…but that’s about it.

Others still can part with all sorts of things..

…but can’t bring themselves to let go of specific cateogries.

Some people struggle with hoarding all their lives.

Others go through phases when they suddenly can have a clearout…

…only for the clutter to build back up.

Don’t let anyone tell you there’s a simple definition for hoarding!

2. It’s more common than you think

I’ve got friends who hoard. I even had a partner who hoarded for a while.

I didn’t recognise that’s what it was at the time.

I just thought they were messy.

(And that was OK. I don’t care how anyone keeps their home so long as they’re happy).

…I personally knew at least half a dozen people with hoarding tendencies.

I’m not talking about people who simply felt overwhelmed by their clutter.

That’s MOST people I know!

I’m talking about people who don’t let anyone into their homes.

Who can’t get sit on a chair or even get into bed, without clearing stuff away first.

Who have whole rooms that are so full they can’t use them.

And there are STILL probably more people who hoard among my friends and relatives than I realise.

Because people who hoard feel ashamed and keep it secret.

Have you got a friend who never invites you round?

You cook them dinner but they prefer to take you to a restaurant?

They’re always up for meeting you but they never invite you back?

I’m fed up with reading superficial newspaper articles about hoarding that tell you it’s caused by divorce, bereavement, redundancy etc.

I’ve worked with people who’ve hoarded all their lives.

I’ve worked with people who’ve experienced all sorts of trauma, and who don’t hoard.

I’ve worked with people who hoard despite being lucky enough to avoid any major trauma in their lives.

And yes, I’ve worked with people who trace their hoarding behaviour back to a major life event.

So maybe, in some cases, it is TRIGGERED by trauma.

But it’s not that simple.

4. There are miracles (but they’re not the ones you think)

Clients, including clients who hoard, tell me they love them.

They help them realise they’re not alone. Not the only one who has this problem.

They give them hope that there might be a way through.

So I’m not saying I wish the programmes weren’t being made.

…they make me spit feathers when they sensationalise the issue…

…encouraging viewers to judge and shake their heads.

…it frustrates me that they give the impression that a complex psychological condition can be “cured” in a matter of days, or even weeks.

It just doesn’t work that way.

In reality, when I work with someone who hoards, it can take months or even years to work through their stuff.

Sometimes, a six hour session results in four or five rubbish and recycling bags to go.

Sometimes, the same amount of time results in just one or two.

Every time my client lets go of something, it’s a little miracle for us to celebrate.

And, so long as my client is letting go of more than they’re acquiring, it’s progress.

Sometimes that progress might be two steps forward, and one step back.

That’s just the way it is.

And it takes a multi-agency approach to address hoarding disorder.

That’s why I’m delighted Green and Tidy is featured on the resource page of The Clutter Movement….

…a hub of information and support on addressing clutter and hoarding behaviour.

I’m a Psychology graduate and a professional coach, with a love of bringing order to chaos.

I’ve got a good understanding of the psychology behind clutter…

…including some of the natural human thought processes that make it hard to let go of stuff.

…and the Sunk Cost Fallacy (how we fool ourselves that we’re avoiding wasting the time, money, emotion etc we’ve invested in something by hanging onto it – even though it’s no longer any good to us).

And I’m not a mental health professional.

Whenever I work with someone with hoarding tendencies, I recommend that they seek psychological support alongside the practical work they’re doing with me.

5. You can manage it (even though it doesn’t go away)

The good news if you’ve got hoarding tendencies is…

…you CAN manage the condition.

…that you delight in sharing with family and friends…

…where you can find anything you need right away…

…where your treasures are stored appropriately and lovingly so you can enjoy them.

It’s likely to be an ongoing project and you may continue to need support.

But you CAN do it. I know. I’ve helped people achieve it. 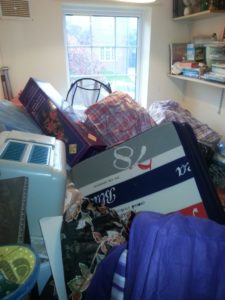 You have Successfully Subscribed!

Join Green and Tidy to get your FREE decluttering video course

You have Successfully Subscribed!